On July 27th Made in Pescadero is being featured on KTSF 26, Bay Area Drop In show. Bay Area Drop In hightlights the beautiful and varied neighborhoods of the San Francisco Bay Area. Hosts Sammy Hastings, Kaitlyn Chen and Sandeep Sood provide home buying and real estate tips as they guide viewers through the streets and suburban locations of the Bay Area.

Made in Pescadero at McRoskey Mattress 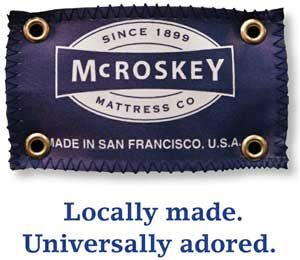 May 5th 1-4pm at the McRoskey showroom
220 Hamilton Ave in Palo Alto Ca.

Wood workers will be there to answer questions, Harley Farms will bring local goat cheese also from Pescadero, all taking  place in the mattress showroom. Get directions.

Oh yea, Dee Harley will bring a baby goat too!

PESCADERO – On a crisp, crystalline winter morning, the kind of glorious day when you can understand why fog-accustomed folks here say that winter is their summer, three men of a certain age were chatting volubly in the back booth at Duarte’s Tavern.

“We’re talking about going to the Azores,” said Terry Shade, polishing off a crab-and-goat-cheese omelette.

Why hanker for the homeland? Don’t these Pescaderans realize they already live in a paradise, an oasis of calm and camaraderie along the San Mateo coast that makes it seem as if the constant buzz and hum of Silicon Valley is not 20, but 2,000 miles away?

Truly, that volcanically formed archipelago off Portugal, ancestral home to many residents here, has nothing on tiny Pescadero – Portuguese for “fishing town,” but really so much more packed into a pfour-square-mile space with 643 residents, not counting goats, chickens, turkeys, peacocks and, especially in the summer months, tourists fleeing fast-paced lives.